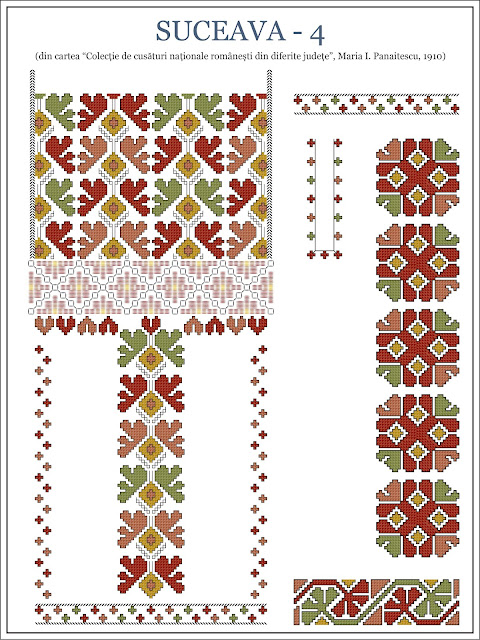 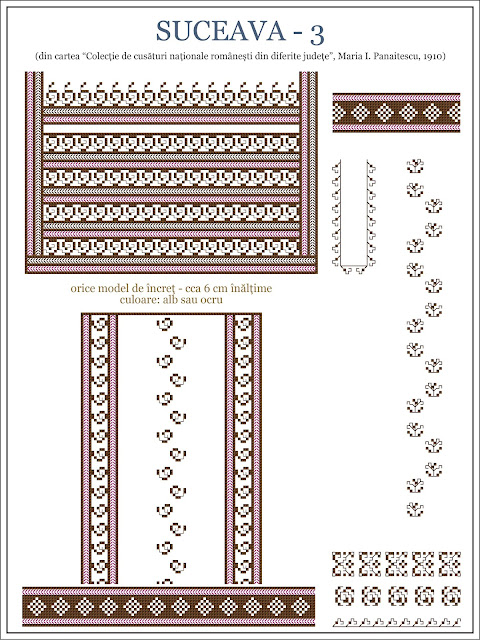 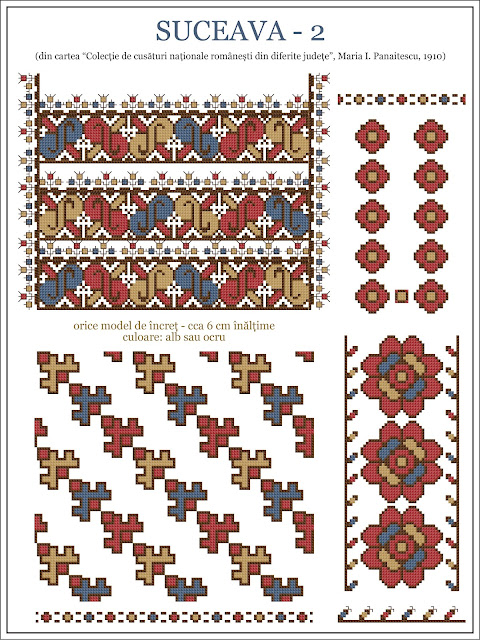 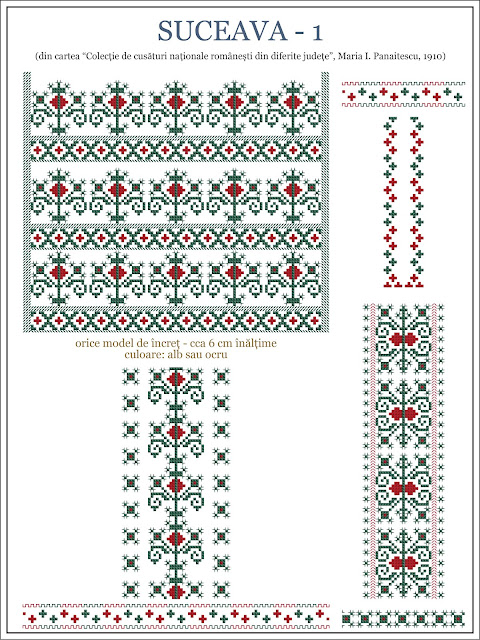 THE GOLD IS COLD 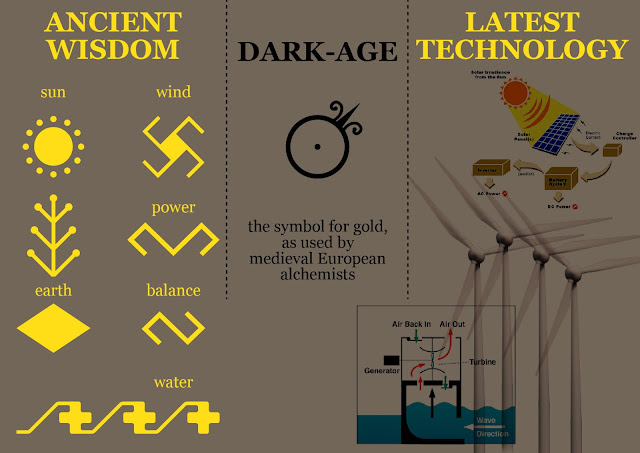 As they had plenty of gold available, our ancestors didn't bother to design an icon for this element and didn't include it on the list of things worthy to worship.
They observed and thought and decided to care only about what is cyclical, regenerable, infinite: SUN, WIND, WATER, EARTH – with everything growing on it. And not last, ENERGY, in all possible forms of expression: force, power, creativity, balance.
We finally invented solar pannels and turbines, to capture the energy we need for our plugs. Great !
But did we exploit everything available, don't we have anything else left? As long as we still dig for gold, no matter the price, it means the Dark Ages are not finished yet.
http://www.rosiamontana.org/ 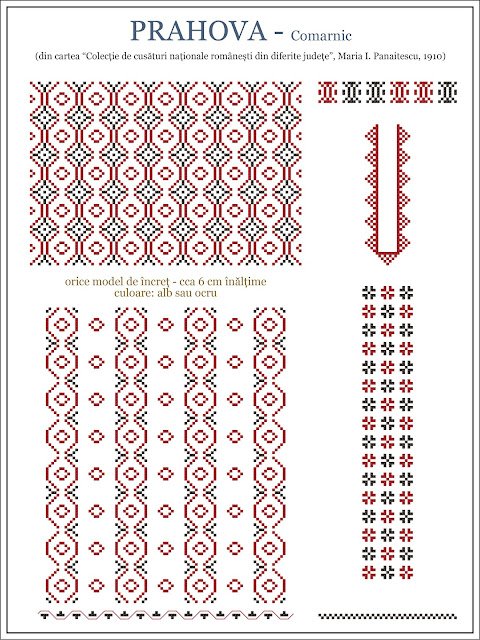 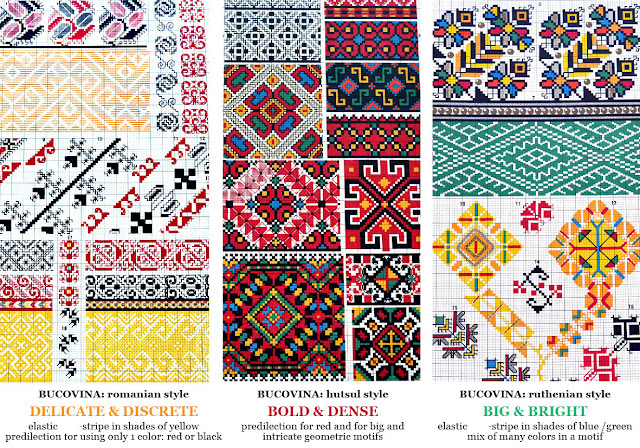 It had to be an Austrian engineer and more than 10 years of research to create such a complex study (published in 1913, in Viena) – because i'm not sure the locals were really aware of their extra-ordinary rich cultural heritage – I guess they found it normal. When seeing women from further north, in their traditional clothes, Bucovina peasants expressed pity "their dresses are so sad"...

In general terms, romanians, hutsuls and ruthenians from Bucovina all dressed in similar clothes – after all, it's about being practical and finding the best solution according to climate, occupation and materials available. Yet each of these nations had a different vision and character and expressed it through embroidery, which adds the final touch of color, composition and motifs used.


So if we zoom in, we are able to recognize their clothes: something that seems like an accomplishment for us today – something that was so obvious for them long ago.

The author concludes that this embroidery is specific for Bucovina and it's not to be found soon beyond its north border, where the population is only ruthenian. The character of embroidery also changes beyond the east border. Bucovina embroidery belongs in the same group with romanian and generally, the Balkan style. He goes into fine details, explaining the differences between different ethnic groups – as seen on their blouses, those with intricate embroidery, used only Sundays or for Holly-Days. While sometimes, certain motifs were 'stolen' by girls from other villages or moved to another place with a marriage – he noticed that women are very conservative in terms of using colors.

ROMANIAN – predilection for very small, delicate motifs, many time in 1 color only: black or red. The horizontal stripe on the sleeve, which divides the composition, was always made in various shades of yellow, from very pale to orange or even to brown. This stripe is created with only certain geometric designs resulting from a different work technique.


RUTHENIAN – predilection for very big motifs and mixing many vivid colors within the same motif. The horizontal stripe on the sleeve, which divides the composition was always made in various shades of green and blue.


HUTSUL – predilection for red color and for certain very bold geometric patterns, where several color were combined – embroidery was compact on the sleeves, almost no empty space was left.

So, not easy to explain Bucovina at a glance – imagine such a small area has 5 distinct etnographic zones: Campulung, Suceava, Radauti, Strojinet, Cernauti.
The troubled history explains the interesting ethnic mix wich created such diversity.
Romanians, Ruthenians, Hutsul, Polish, Germans, Jews – all brough their contribution.
Despite the fact that all these nations managed to find a formula for living in relative harmony, each of them had been, unfortunately, persecuted more or less aggressive by one political regim or another.


soon after falling under the influence of the Roman empire, aggressive tribes plunder it:


14th century, Bucovina is part of Moldova and briefly, in 1600, part of Romania


19th century – influx of immigrants: Germans, Jews and Polish, but they mainly settle into cities.


More ruthenians came down from north and settled, while many romanians and germans migrated to US.


In November 1918 Bucovina voted to unite back with Romania, as normal for a historic part of Moldova. Quite soon, because of romanization policies, slavic schools were closed.


In 1940, Red Army moved in north of Bucovina and a border was traced.


Between 1940 – 1950: the Soviet regim directed systematic repression, mass deportation and exterminations – all agains Romanian population in north Bucovina, but not only! (repatriation of Germans and Poles). To this unjustice, add the deportation of the Jewish population in Transnistria, authorized by the Romanian regime during the war. Partisan groups (composed of both romanian and ukrainians) fought against the Soviets but couldn't do much :( ... in the first year of Soviet occupation the population of north Bucovina decreased drmatically.


Not only the people but the traditional costumes had to suffer as well during the Soviet regim: they also had to lose their individuality and they became like uniforms, all equal, to be used in huge folklore shows. The motifs were distorted, out of scale, to look good on TV or on stage.
Sources and studies from 100 years ago are real treasures for those who care to get back their authentic heritage. 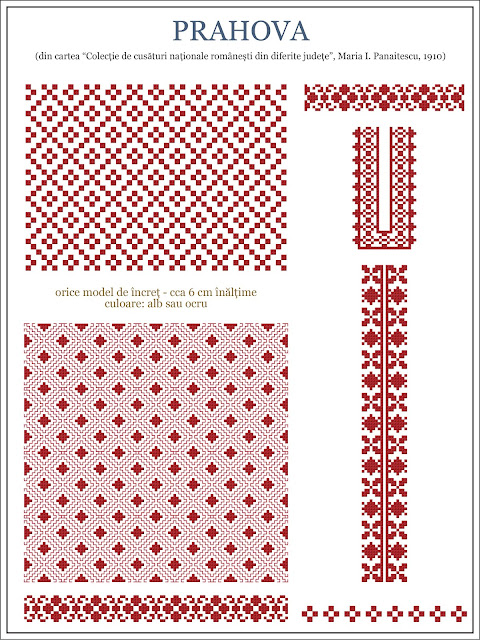 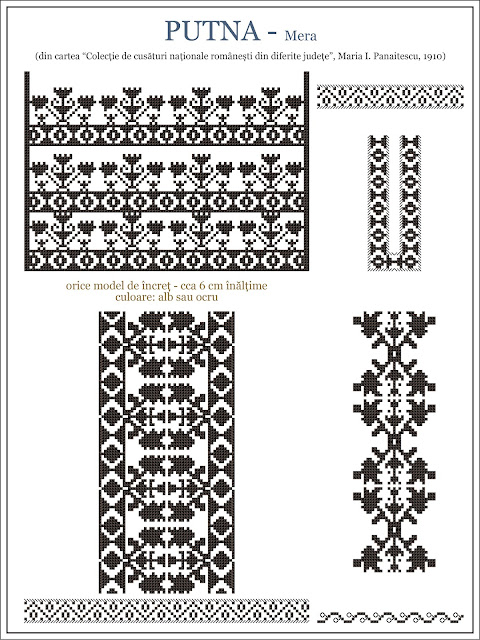 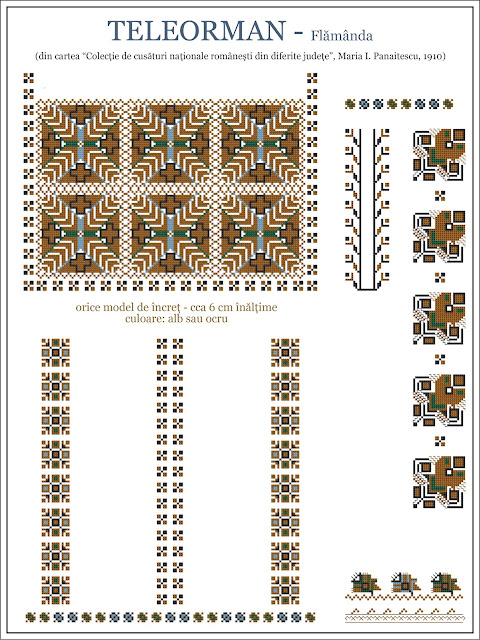 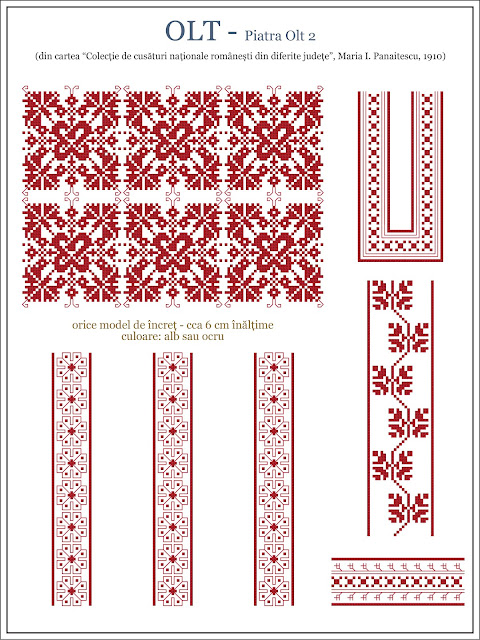 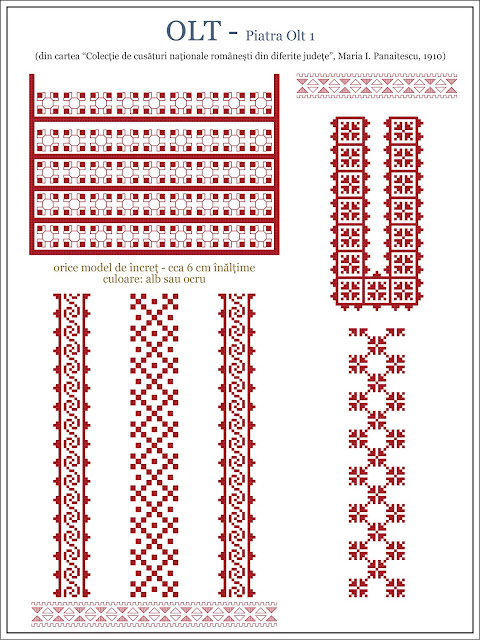 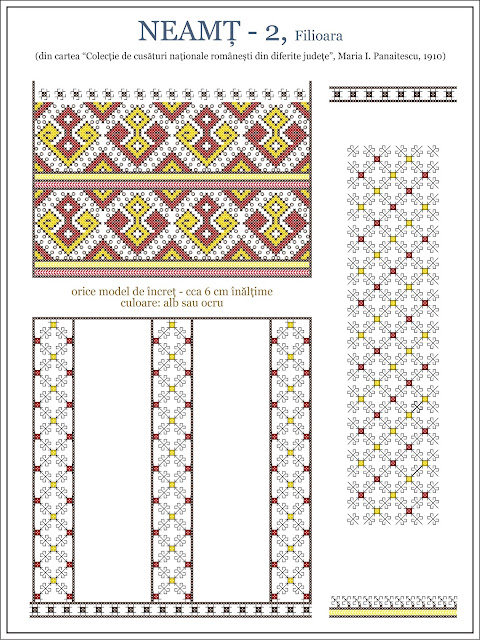 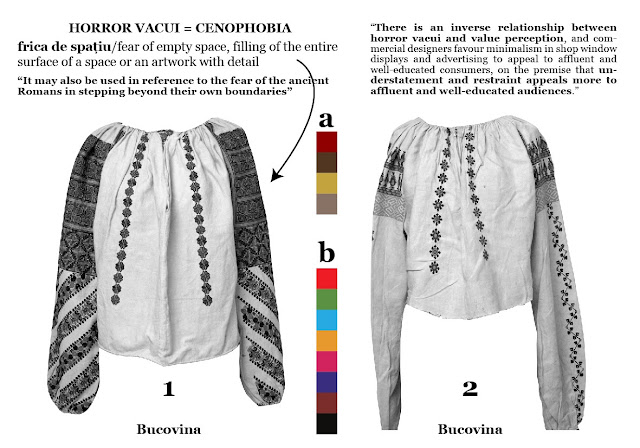 
Bucovina is a mosaic of different ethnic groups and in the image you can see 2 shirts with identical cut and similar compozition.
1) despite their colors (that's why I desaturated the images) can you recognize which shirt was made by and for a Romanian woman?
2) How do you match the colors with the composition? (I've selected the colors used for these blouses in 2 sets – a and b)


"The horror vacui concept is unknown to a spirit inclined towards always finding the principles, the motivations, the finality of each element of his effort" – CONSTANTIN PRUT, 1991
Publicat de IOANA CORDUNEANU la 02:51 4 comentarii: 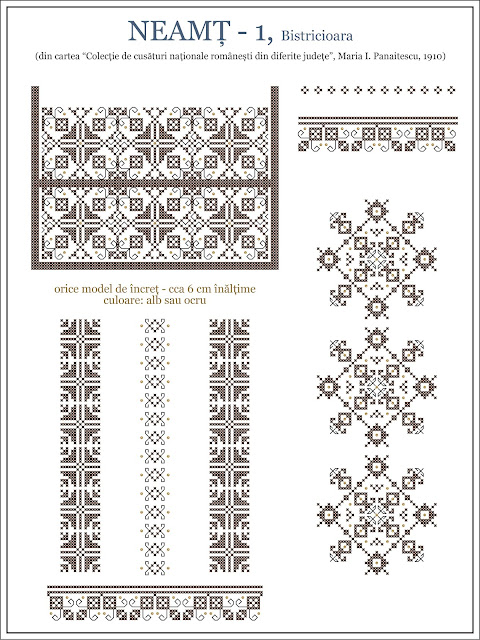 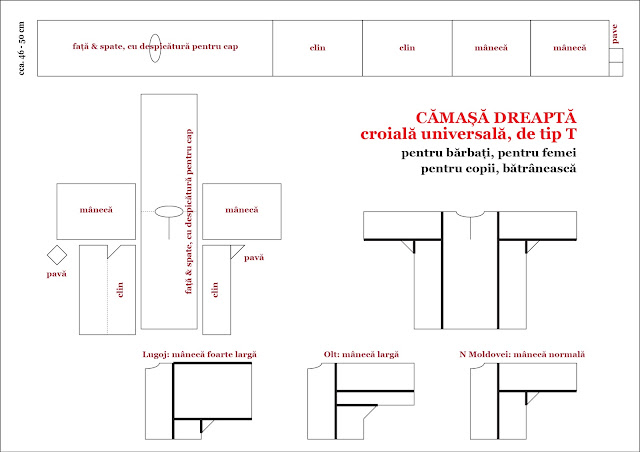 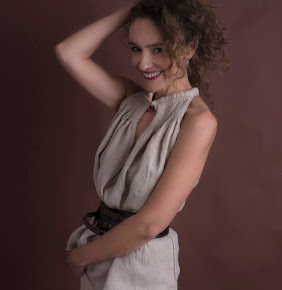